Posted at 15:40h in Birthday Gemstones, News by Nicki Riddette-Morgan

The grandeur of ancient Egypt is evident in their jewellery. Egypt had the resources. There was gold, emeralds, turquoise, cornelian and faience. They also had the craftsmen who could produce exquisite work during this time. This wonderful broad collar was discovered in the tomb of Senebtisi in 1907. Little is known of her, but it is assumed she was of royal lineage and lived during the Middle Kingdom, c.1859-1770 BC.

Only wealthy Egyptians could afford gold, semi-precious stones or coloured glass. Jewellery was worn for adornment, but also for spiritual and mystical purposes as well. Some pieces were believed to ward off evil or bring good luck…for both the living and the afterlife. Beetles, scarabs, jackals and falcons were favourite motifs.

The back of this collar is set with two falcon heads which symbolised Horus who was the revered god of the sun. He is one of the most significant of the ancient Egyptian deities and symbolised power and healing. He also represented many other things and was portrayed in pottery, painted on walls and was seen in jewellery.

Broad collars were quite heavy in the front. To balance this, a counterweight linked to the end terminals prevented the collar from falling off. 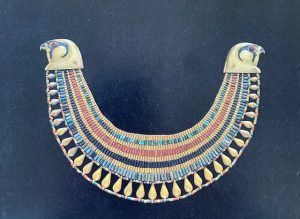 What I like about this piece is that it is both simple and complex. The beads graduate in size and are all fairly uniform. There are only four colours; gold, turquoise, dark blue(faience) and cornelian. The falcon heads are stylised and not very detailed. If you think about the piece as a whole, consider how each bead was drilled by hand, how the faience was made and the gold melted and rolled out to form more beads and drops. Then the entire collar was strung, or rather intricately woven together- and all this was done without machines thousands and thousands of years ago.