13 May Ancient Emerald Mines of Egypt

Posted at 07:00h in Birthday Gemstones, News by mara_hotung

Remember the quiz earlier this week?

Where were the earliest emerald mines located?

If you guessed Egypt then you, my fellow gem enthusiast, are correct! The oldest emerald mines are located in the Wadi Valley of Sikait which is about halfway between Luxor on the Nile River and Roman-era port city of Berenike on the Red Sea. It’s a barren, no man’s land of dry, rocky mountains. Hidden deep in the mounds lies treasures of gold, silver, amethyst and, you guessed it, emeralds. 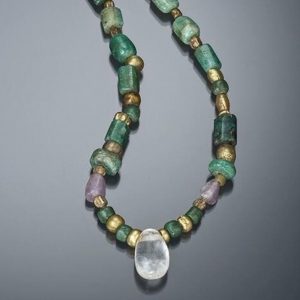 It is thought that the mines were active as early as 500 BC, however, it was around 30 BC when the mines were exploited by the Romans. They referred to the area as  “Mons Smaragdus” which means Emerald Mountain.  Although the emeralds were not the best colour or quality, they were pale green and had visible inclusions, they were abundant and they were the only source in antiquity. The ancient Egyptians revered emeralds. The green stones were considered sacred and represented fertility and immortality. It’s no wonder emeralds were Cleopatra’s favourite gemstone.