03 Apr Easter and the history of the Fabergé Eggs

Posted at 11:37h in Collections by Nicki Riddette-Morgan

When I think of Easter, I dream of chocolaty Easter eggs that are rich and creamy.

In Imperial Russia, it was an entirely different kind of egg and one that was not edible. 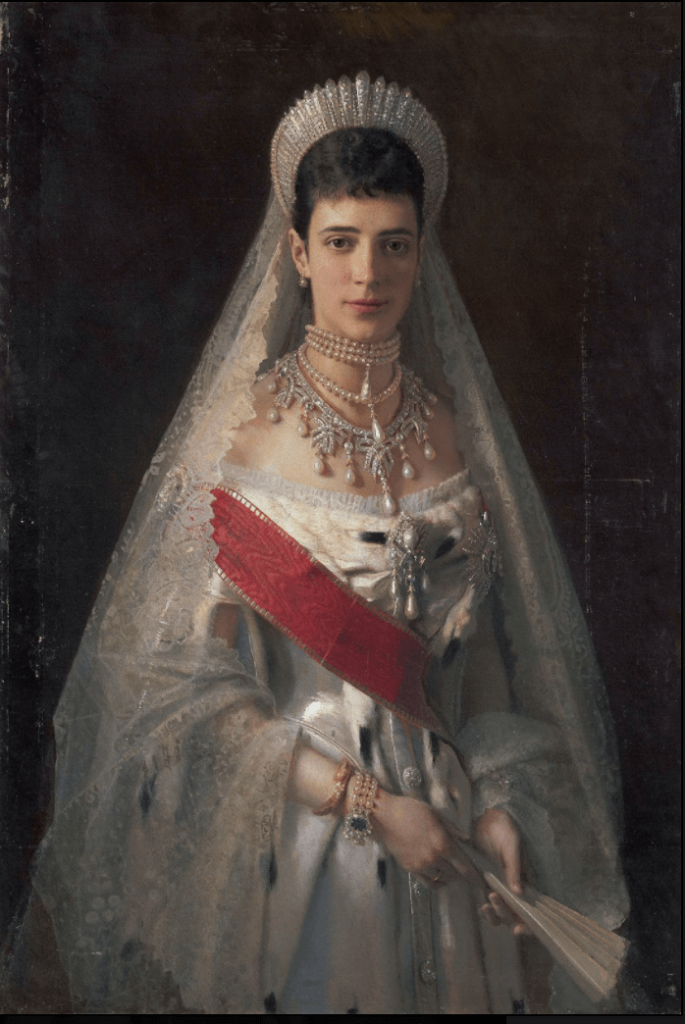 Easter was and is the most celebrated holiday in Russian Orthodoxy.  It’s all about rejoicing in the birth of Christ, families coming together over festive dinners and the tradition of gifting Easter eggs.  By the 1900s, Easter became a significant commodity such that bestowing Easter presents became a specialised area in Russian decorative arts. The working class received painted Easter eggs in wood and other practical materials.  For the elite, porcelain, hard-stones and precious materials were more likely. It didn’t matter what class you were born into; the exchange of Easter presents for a three-part cheek kiss was tradition.

Tsar Nicolas II noted in his diary on Easter Sunday, “exchanged Easter kisses with 267 people before lunch and then came all the courtiers and ended with the choir-a total of 730 people…my cheeks burned rather hot.” (1)

The Russian Imperial family took the idea of gifting Easter eggs to a new level, but Carl Fabergé turned the ubiquitous egg into a bejewelled masterpiece. Fabergé was no stranger to the Imperial family. In 1882, his work had caught the eye of Empress Maria Feodorovna at the Moscow All-Russian Industrial and Art Exhibition.  It was also during this exhibition that Fabergé won the coveted gold award for design.

Let’s backtrack a few years. As a young girl, the Empress was enchanted by an early eighteenth-century French Easter ivory egg that belonged to her Aunt, Princess Vilhelmine Marie of Denmark. Upon her death, the Princess bequeathed it to a relative, King Christian IX and Queen Louise of Denmark, who happened to be the Empress’ parents. 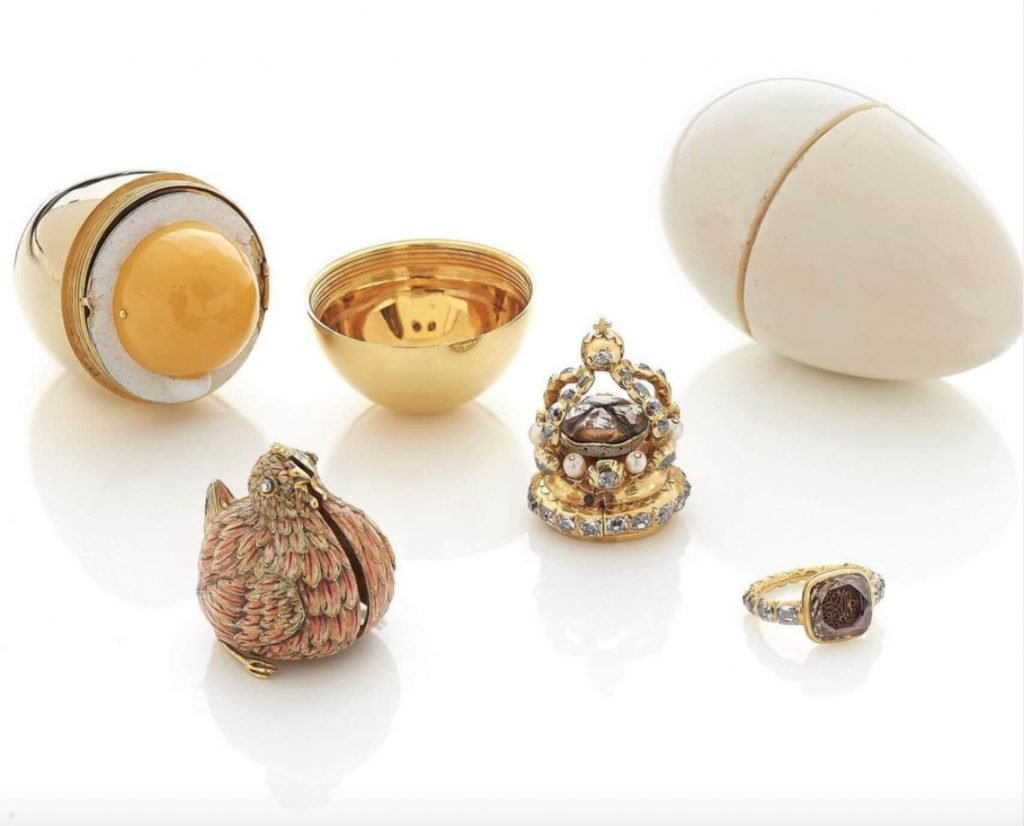 This object’ d’art  was quite elaborate. The egg opened to reveal a half yolk with a hen adorning a gold diamond and pearl crown.  Within the jewel-encrusted crown was a diamond ring. Tsar Alexander III knew his wife was enchanted with this object from the childhood stories she told him. In 1885, the Tsar commissioned Fabergé to recreate a version of that egg as an Easter gift to his wife, Empress Maria Feodorovna.

It was the first Imperial Easter egg and is called The Hen Egg.

Fabergé’s version was slightly more straightforward in design but evoked the same thrill of opening each compartment to find a surprise, very much like the matryoshka nesting dolls.  The Imperial egg was decorated in white enamel that, when opened, revealed a whole yolk made of gold; within this yolk nestled a multicoloured gold chicken, which in turn held a tiny replica of the Russian imperial crown. Hidden in the crown hung a small ruby pendant that could be attached to a gold chain and worn.

The Empress was impressed so much that it became a tradition that every year during Passion Week, Fabergé presented the Tsar with another Imperial Easter egg that was more intricate and complicated than the last egg.

After the death of his father, Alexander III, Tsar Nicolas II  continued the tradition. He commissioned Fabergé to create Imperial Easter eggs for his wife, Empress  Alexandra Feodorovna and his mother, the Dowager Empress Maria Feodorovna.

From 1885 to 1916, the jewellery house of Carl Fabergé created fifty Imperial Easter eggs. In 1917, the history of Russia changed. The Bolsheviks ransacked the country and took art, jewellery, furs, and property. Many items were broken up, stored in the Armoury, sold or stolen. Surprisingly, the Imperial eggs remained intact as they were considered not as valuable as the Russian Crown Jewels-which were dismantled.

Fast forward many decades and the story continues, but this time on another continent. The late Malcolm Forbes was an avid collector of Fabergé eggs. He had the single most extensive collection of Imperial eggs globally, and when his heirs consigned the eggs to Sotheby’s,  the interest was international. There was no doubt that the entire collection would sell and would end up in the four corners of the globe.

In 2004, Russian businessman Viktor Vekselberg successfully acquired the entire collection at the eleventh hour before it went on the auction block. By purchasing Forbes’ collection, Vekselberg kept the assemblage intact. After eighty years in exile, the Imperial eggs returned to Russia and is now part of the permanent collection at the Fabergé Museum in St. Petersburg. One can say that the eggs have returned home to the city where the Fabergé story began. 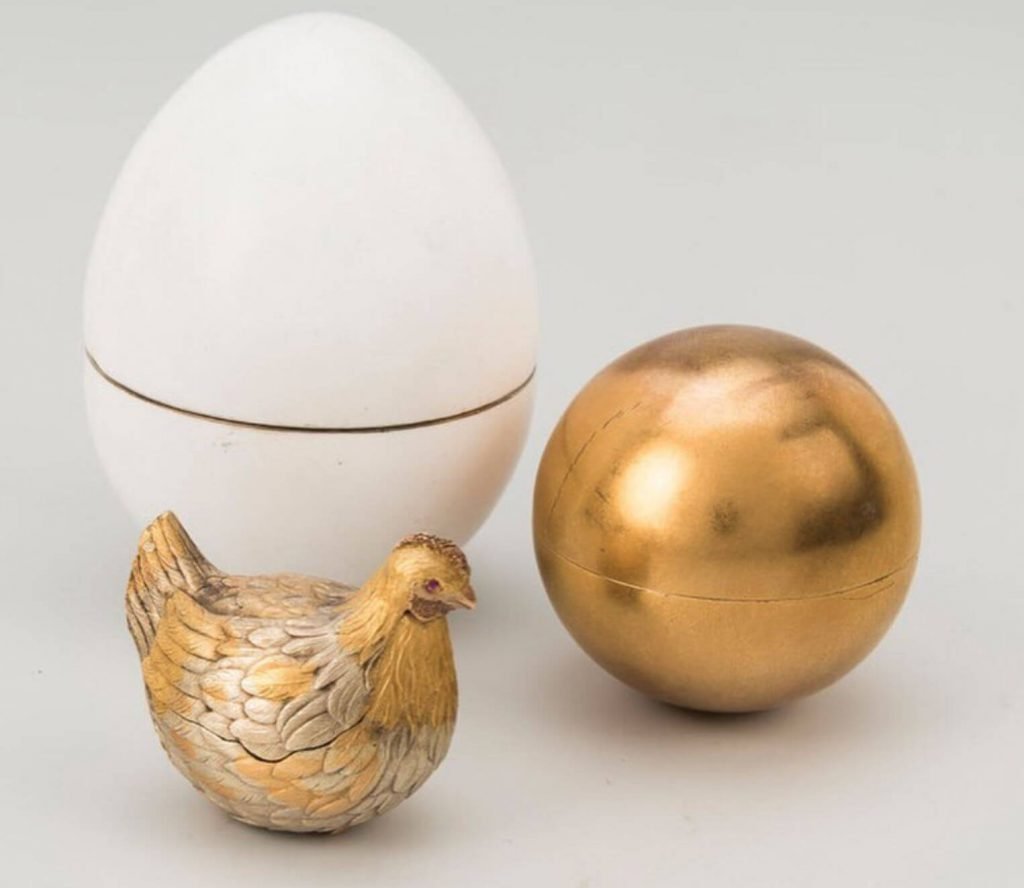 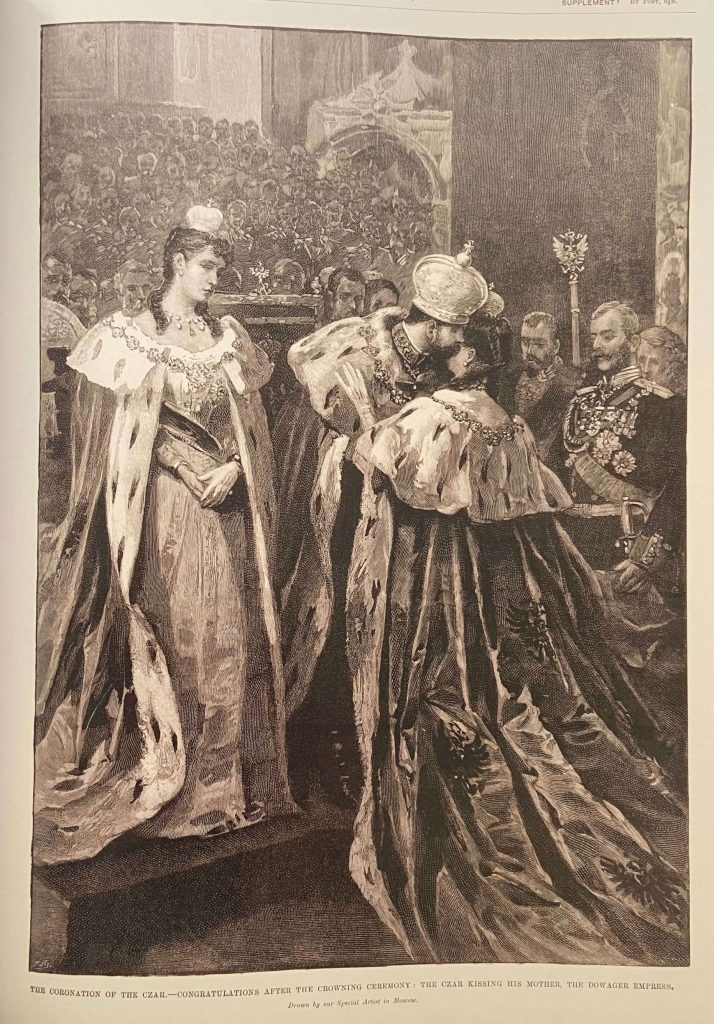 Coronation of Tsar Nicholas II kissing his mother, the Dowager Empress Maria Feodorovna. His wife, Tsarina Alexandra stands to his left. This image appeared in the Illustrated London News. (2)