Posted at 07:00h in Birthday Gemstones, News by mara_hotung

The colour green is revered in Ireland. When I think of Ireland, I can’t think of any other colour but green. The Emerald Isle with its green rolling green hills, misty, verdant mountains, leprechauns,  four-leaf clovers, shamrocks and the national flag which is partially green. (Actually, it started out as royal blue, but that’s another story.)

However,  did you know that the colour green was celebrated and considered sacred in India during Mughal times?  Emeralds were abundant in ancient India. By Mughal times (16th & 17th centuries) most of India’s emerald mines no longer existed. With the discovery of what is now modern-day Columbia, new material found its way to India via Portuguese traders. Emeralds from Columbia exhibited a green never seen before. The gems appeared to “glow.” The crystals were also large, and therefore sacred scripts and personal inscriptions were carved on the back of tumbled beads or flat faces.  So much were emeralds revered and coveted, it was stated that Shah Jahangir had a half-million carats of unmounted emeralds stored in his treasury.

One such emerald that deserves attention is The Shah Jahan Emerald weighing 30.60 carats. (Fig.1) It was part of the  Al Thani Collection and was sold at Christie’s in June 2019. It was believed to have been carved, cut and polished in Deccan or Northern India sometime between 1621-1622.

Often spinels and rubies were reserved for inscribed royal titles of their owners. However, this spectacular emerald is written “Shihab al-din Muhammad Shah Jahan Padshah Ghazi 1031,” in Persian. It has remained unmounted for centuries.  There was no need for any superfluous adornment. The emerald’s beauty spoke for itself as did its inscription.

In December 2019, another important, carved emerald came up for auction at Bonhams.

In a completely different genre, the emerald pendant (Fig. 2) is carved with Indian floral motifs within a  frosted rock crystal frame and accented with diamonds. It is Cartier and dated 1912.

The necklace was an engagement gift from Lady Sackville to her daughter Vita Sackville-West. Vita’s wedding to Harrold Nicholson, a career diplomat, was the event of the season. It took place at the family’s ancestral home Knole House, and over 600 guests filled the Great Hall. The wedding gifts were on full display, including jewellery. It was a sight to behold.

The necklace is important on several levels. In 1911, Jacques Cartier took his first trip to the Sub-Continent. He became fascinated by the splendour of Indian jewellery. He met dealers as well as the Maharajas who wanted their jewellery to be reset in the more fashionable style of the west.

The design of this necklace sees the transition from the popular floral garland style to a more structured and architectural style of the art deco period. There was a shift from jewellery set with diamonds to jewellery that now showcased colourful gems, like emeralds, rubies and sapphires. 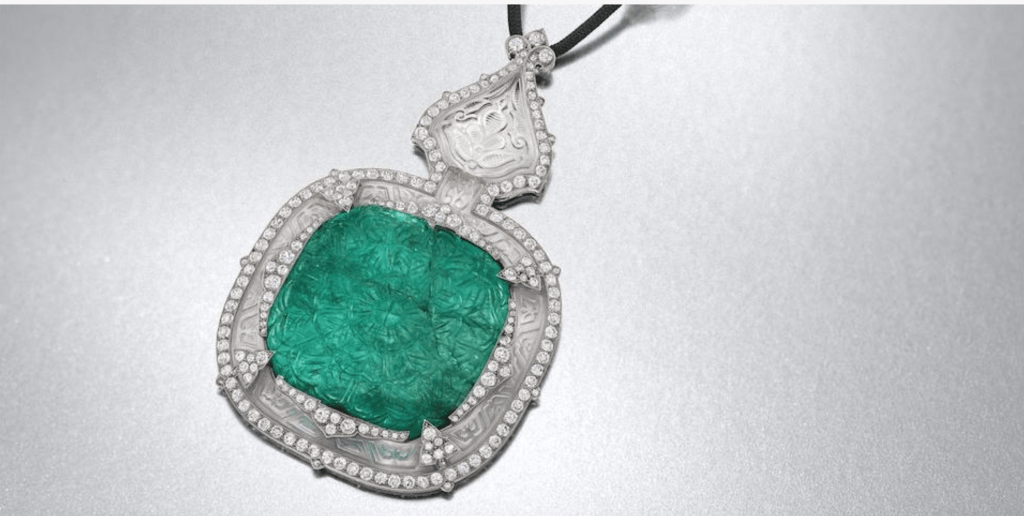 When Vita passed away, she had an enormous and spectacular collection of jewellery. The majority was secured in a vault, hardly ever worn. The only documentation of the piece is a black and white photograph in Hans Neddlehoffer’s book on Cartier. The necklace is noted as Cartier, Paris and dated 1912. It was reported that when this necklace was offered at auction, it was referred to as the “Lost Jewel” as it was probably the first time it had been seen in public in over 100 years.

On this day, I’m celebrating St. Patrick’s Day with two historic Indian emeralds. Both rare, beautiful and of course…green!