Posted at 09:00h in Birthday Gemstones, News by mara_hotung

For those of you who are celebrating birthdays this month, look no further than to the garnet, and not just towards the red colour of pyrope, almandine or rhodolite garnets (Fig 1. below) or the fiery orange hue of a mandarin garnet (fig 2. below) 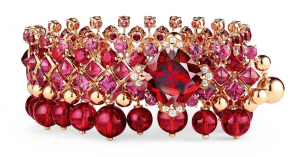 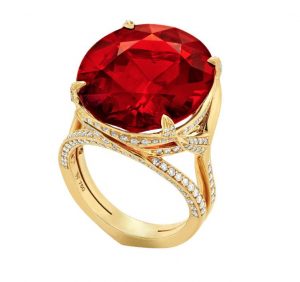 Garnet is also a gem that displays verdant shades of green as seen in demantoid, tsavorite and grossular garnets. 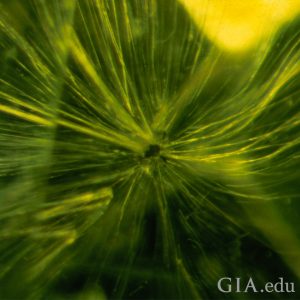 Demantoid garnet is the rarest and most valuable of the garnet variety. It was first discovered in the  Ural Mountains in the late 1800s. Did you know that its high lustre and dispersion are more than diamond?

What I find most intriguing about demantoid garnets is it’s unique “horsetail” inclusion (fig 3 – right). We’ve been taught that gems are most valuable when they are free of inclusions. However, if I were to possess a demantoid, I would want this characteristic.  Perhaps it is the gemmologist in me. A horsetail inclusion is rare and it confirms that what I have is a true demantoid.

It’s no wonder that when it was discovered, demantoid became a popular gem in Fabergé’s designs. In 1913, the Imperial Winter Egg (fig 4 – below) was given to The Dowager Empress Maria Feodorovna by Tsar Nicholas II.  It was created by workmaster Albert Holmström and designed by Alma Theresia Pihl. You will have seen Pihl’s ice crystal in my recent insta post. 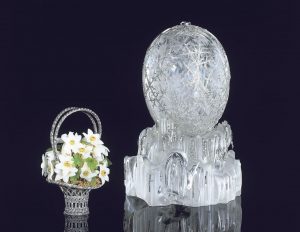 Tsavorite garnets (transparent grossular garnet) may not hold the allure of demantoid garnets. However, their vibrant green colour can often be confused with emeralds. Although they were first discovered in Tanzania in 1967,  they were named after the Tsavo East National Park in Kenya.  The gemstone became very popular in the 1970s when Tiffany & Co began including the gems in their designs. Unlike emeralds, they are less brittle and have a higher dispersion. I’ve been told that tsavorite garnets are much rarer than emeralds. I don’t know if they are rarer (something for me to research). What I can say is that they can hold their own. 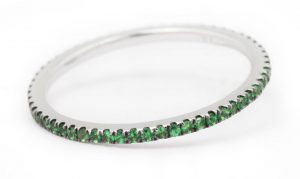 Lastly, there is Transvaal jade (massive grossular garnet). It is an opaque stone that is usually fashioned as beads or carved as decorative ornaments. It is often confused with nephrite jade as they are similar in colour and have similar black inclusions. I was looking through my stock and realised I did not have any specimens. Next time I am at the Hong Kong jewellery fair, I’ll be sure to pick one up. They are beautiful when polished (fig 5. below).

Green garnets symbolise hope, empowerment and renewal. I can’t think of any other gemstone to celebrate the New Year. Now that is something to be envious about! 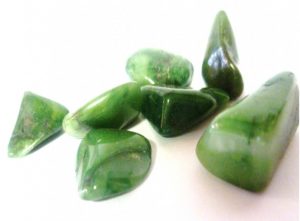