Posted at 07:11h in Events, News by mara_hotung 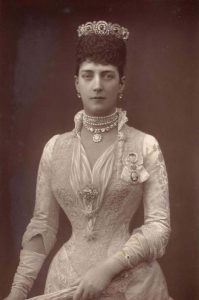 One of the lesser-known tiaras is Queen Alexandra’s Amethyst “Mystery” Tiara.  It was gifted to her by her brother-in-law Tsar Alexander III. When the Queen died intestate, her jewels were divided among her children. The amethyst tiara went to her eldest daughter, Louise, Princess Royal and Duchess of Fife. It was then bequeathed to her second daughter, Maud of Fife, who later became Countess of Southesk upon her marriage to Charles Carnegie, 11th Earl of Southesk.

During Queen Alexandra’s lifetime, the tiara was rarely seen or worn.  Images of her daughter or granddaughter wearing the tiara are far and few between which is why it is referred to as the “mystery” tiara. The last time it was seen was in 1946 when it was auctioned at Christie’s for £1750.

However, there is a more compelling story. On closer inspection, the amethyst tiara that is assumed to be Queen Alexandra’s and is noted all over the internet as belonging to her is not the same one that the Queen is photographed wearing (left).

The tiara (below) is actually in Florence in the Museo degli Argenti.  It is Cartier and dated around 1900.

The question now is where is Queen Alexandra’s amethyst tiara-the one she is photographed wearing? I’ve read that it is in a museum in Germany. Upon further research,  I have not been able to confirm this or find any further clues. If anyone can shed some light, I’m all ears.