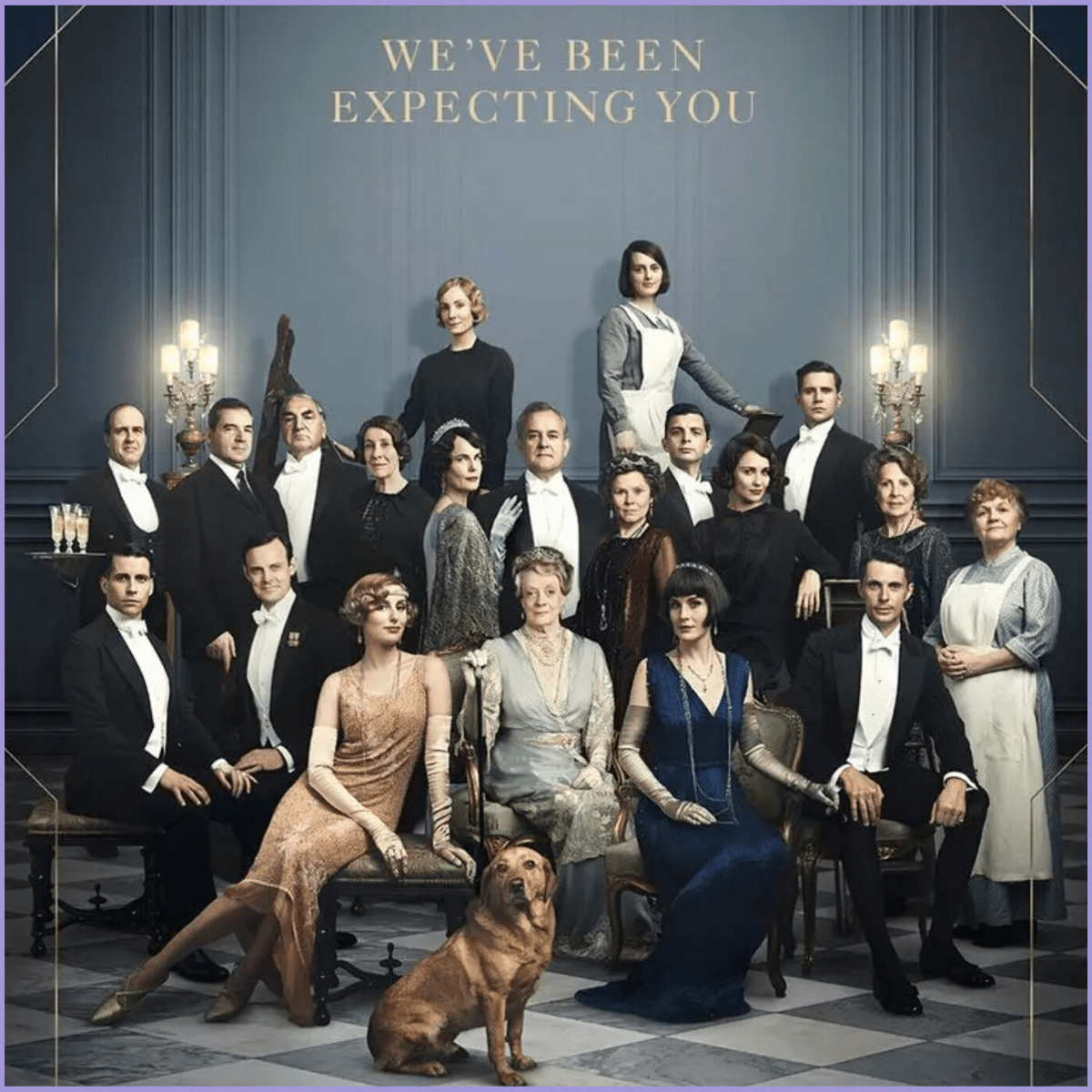 23 Sep The Jewels of Downton Abbey-Part One

Posted at 16:51h in Royal Jewels by mara_hotung

To say that I was more than excited when I heard that  Downton Abbey was making its way to the silver screen is an understatement. Since its television debut, Sunday nights were sacred. My mother, who was a bigger fan than I was, would join me in front of a roaring fire my husband had just made.

For one hour, we allowed ourselves to be transported back in time to the world of the Viscount and Viscountess of Downton, otherwise known as the Earl and Countess of Grantham. The show encompassed our lives. Our weekly dinner conversations pondered if Lady Mary would eventually marry Mathew Crawley. We asked, would Lady Edith become an independent, working woman? What sarcastic remark would the  Dowager Countess, Violet Crawley surprise us with? 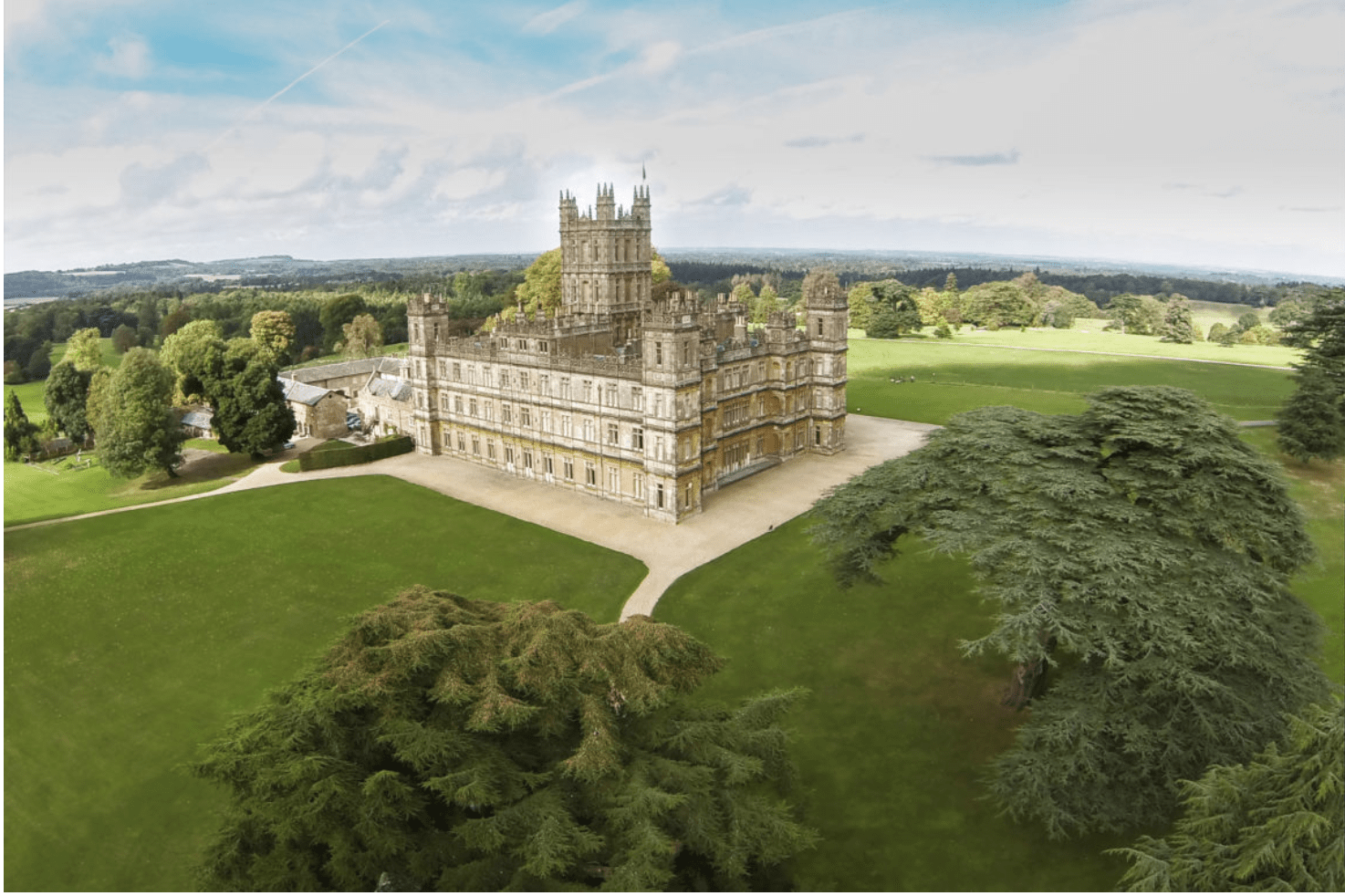 During the fifth series,  my husband and I were invited to Highclere Castle for a charity fundraiser hosted by JDRF. We toured the castle where the majority of the filming takes place.  The kitchen and downstairs scenes are filmed at Ealing Studios in London.  At dinner, I had the honour of sitting next to Hugh Bonneville, who plays Lord Grantham. He was entertaining, engaging and had me laughing the moment I sat down. My husband was at another table seated next to Joanne Froggatt, who plays Lady Mary’s personal maid, Anna Bates. Jim Carter, who is the imposing head butler Mr. Carson, acted as auctioneer.   With his deep, thundering voice, he fired off the lots. The most popular lot was spending a day with the cast on set. I am not sure how it came to be, but we were the lucky winners. Both my husband and I  could not wait to surprise my mother with the news that she was finally going to meet the actors of Downton. On the proposed day, she set off with her trusty and loyal carer Carole to watch the final episode of Season 5. They came home with stories Mrs. Patmore kindly serving them tea and cake. Lady Mary kept the conversation going while she waited for her call.  It was an experience my mother would always remember and cherish.

For six years or 52 episodes, we immersed ourselves in the fictional story of English aristocracy so cleverly written by Julian Fellowes.  We took in the magnificent house, the furnishings, and the grounds.  We connected with the characters and admired their beautiful clothes created by costume designer Anna Robbins. There was also the jewellery, which as you can imagine, was in a category of its own.

On the day of its premiere,  I snuck off with two girlfriends to watch the matinee. I felt a little mischievous doing this during a workday, but this was Downton!

The film did not disappoint. The story was entertaining, involving a visit from King George and Queen Mary. There were plots and subplots, chaos between the Royal Household and Downton servants, conflicts between rightful heirs,  an attempted assassination,  arrests and a developing romance.

For me, it was wonderful to reconnect with the characters.  I also wanted to see the fabulous jewellery, some of which was recreated and some original.

In this first part series, the magnificent Vladimir Tiara is featured. It was the jewellery highlight of the film. 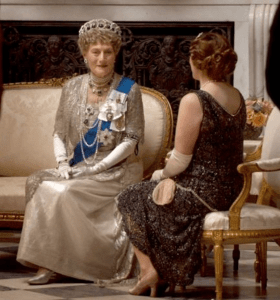 In the film, Queen Mary wears a parure of emeralds and diamonds consisting of a tiara, necklace, earrings, bracelet and brooch.

However, the original tiara was not initially set with emeralds but instead natural pearl drops. The Vladimir Tiara has a fascinating history and to better understand the gems that are part of this magnificent piece; an intriguing backstory is unveiled.

In 1818,  Augusta of Hesse- Kassel, the Duchess of Cambridge (Queen Mary’s grandmother) acquired through a charity auction, 30-40 cabochon emeralds, also referred to as the Cambridge Emeralds.  They were passed down to her daughter Mary Adelaide, the Duchess of Teck (Queen Mary’s mother) and then on to Prince Francis of Teck (Queen Mary’s brother). Upon his sudden death in  1910, the Cambridge Emeralds mysteriously came into the possession of his mistress. Were it not for Princess Mary of Teck who later became Queen Mary; the emeralds may have been lost forever.  Princess Mary managed to retrieve them under sketchy circumstances.

In 1911,  George V was crowned Emperor of India, at the Imperial Durbar held in Delhi.  For this event,  Queen Mary had the majority of the Cambridge Emeralds set into what is now known as the Delhi Durbar parure. The entire emerald and diamond suite can be seen on Queen Mary in the ballroom scene (Left: Queen Mary wearing a replica of the Vladimir tiara part of  the Delhi a Durbar parure recreated by the very talented model maker Martin Adams)

How did the Vladimir Tiara become part of the current Queen’s personal jewellery collection? To answer that question, we must delve into the history of Imperial Russia and meet the Grand Duchess Maria Pavlovna. 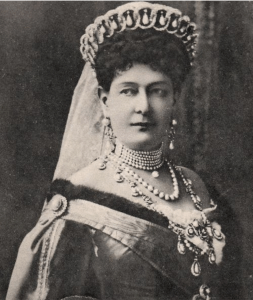 Maria Pavlovna was born Marie Alexandrine Elisabeth Eleonore of the Grand Ducal House of Mecklenburg-Schwerin. At a young age, she was betrothed to George Albert I, Prince of Schwarzburg-Rudolstadt. She soon broke off her engagement upon meeting the Grand Duke Vladimir Alexandrovitch,  who was her second cousin and also the third son of Czar Alexander II. They fell deeply in love and in 1874, they married. She took the Russian name Maria Pavlovna and soon set out to be one of the grandest duchesses in the Romanov dynasty.   For her wedding gift, the Grand Duke presented to her an impressive tiara fit for an empress.  The tiara was commissioned by Carl Edward Bolin, who was one of the court jewellers at the time. He designed a tiara set with numerous old-cut diamonds and enormous, natural pearl drops. The result was a stunning Vladimir Tiara, which cost a staggering 48,200 rubles. It was an excessive amount. However, Maria Pavlovna was committed to establishing an opulent court at Vladimir Palace in  St. Petersburg. Her extravagance was to rival that of the Czarina. There was considerable jealousy between the aristocrats. The Duchess was renowned for her extravagant style, her sumptuous parties and her magnificent and extensive jewellery collection. 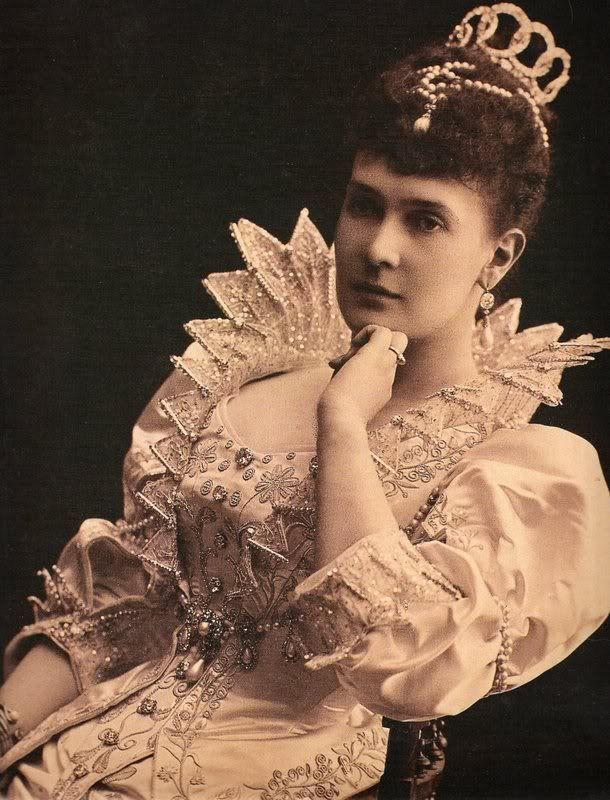 The Grand Duchess Maria Pavlovna of Romanov of Russia (The Elder) wearing the Vladimir tiara as a coronet. Photo: Wikipedia

When stirrings of the Bolshevik Revolution began to emerge, Maria Pavlovna, left St. Petersburg for the countryside taking with her only a few “daytime” jewels.  How is it that her more important jewels, the ones she left behind, escaped the hands of the revolutionaries? Maria Pavlovna carefully hid them in her apartment in Vladimir Palace. With the help of a friend, Albert Stoppard who was a British art dealer and alleged spy,  the jewels were concealed in a sack and safely transported to London.  They were delivered safely into the hands of her son, Grand Duke Boris, who was in exile and living in London. Maria Pavlovna eventually escaped Russia and lived in France until her death.  It is noted that she was the last Romanov to flee Revolutionary Russia.

The question of how her jewels became part of the Queen’s personal collection is simple.

The Vladimir Tiara was bequeathed to the Duchesses only daughter, the Grand Duchess Elena, who was now Princess Nicholas of Greece. To support her family while living in exile,  the Vladimir Tiara was sold to Queen Mary in 1921 for £28,000, which at that time was a large sum of money. As Queen Mary already had the Cambridge Emeralds and the original natural pearl drops were detachable, the gems became interchangeable and resulted in different looks depending on the occasion. The Tiara could be worn set with the large, luminescent pearl drops or decorated with verdant green emerald drops, or simply unadorned allowing the design, diamonds and history to speak for themselves. 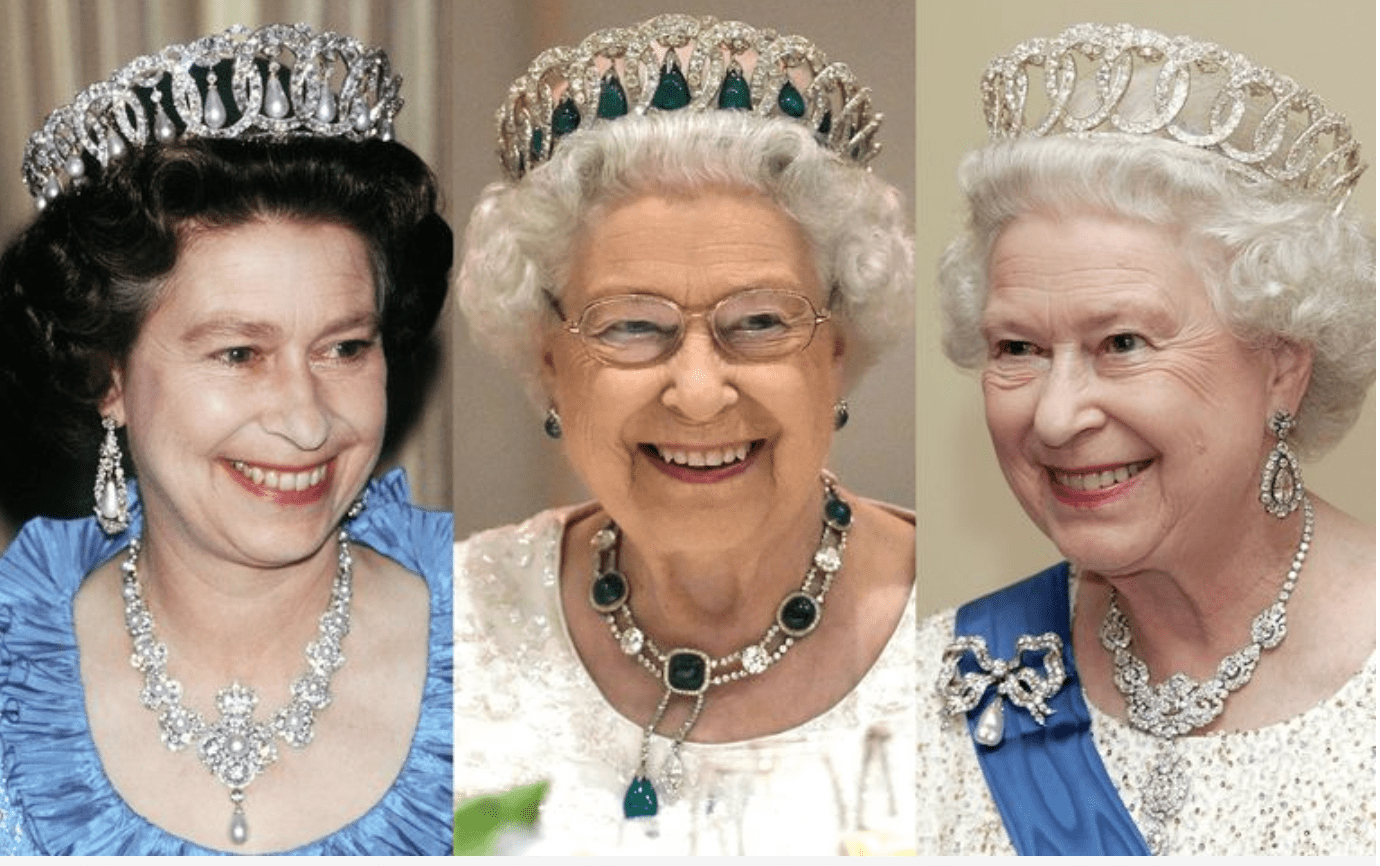 Left: Her Majesty Queen Elizabeth is wearing the Vladimir Tiara with the natural pearls, Centre with the Cambridge Emeralds and Right without any drops.  Photo credit: Town and Country Magazine / Getty Images