It’s been several months since the wedding of Princess Beatrice to Edoardo Mapelli Mozzi.  It was a small, intimate celebration attended by family and friends. Although it was kept a secret, it was a royal wedding in many ways.

Traditionally in a royal wedding, the bride wears jewels from her family. Diana, Princess of Wales wore the family’s Spencer Tiara and Camilla, Duchess of Cornwall wore one that belonged to her mother, The Cubit Tiara.

(Above) Camilla wearing the Cubit Tiara on her wedding day Andrew Parker Bowles, 1973.

(Above) Princess Diana wearing the Spencer Tiara on her wedding day to Prince Charles, 1981.

It was assumed that we would see Princess Beatrice wearing her mother’s tiara, the York Diamond Tiara. At the time of her wedding to Prince Andrew, Sarah Ferguson, now The Duchess of York,  did not have a family tiara. A tiara was commissioned for the occasion and given as a wedding gift by the Queen and Prince Philip.  The delicate headpiece was made by Walpole a member of Gerrard and is designed with scrolling acanthus leaves and collet-set diamonds. 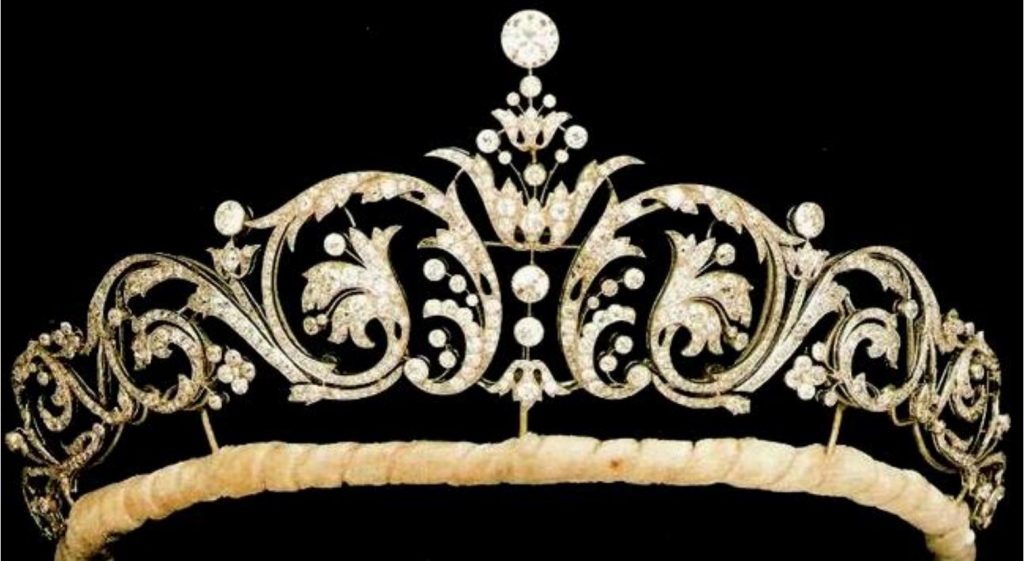 Instead, Princess Beatrice surprised us all. Not by her low key wedding, there were only 20 guests, namely family and close friends, but by her choice in her wedding gown and tiara. She chose a vintage gown designed by Norman Hartnell and Fringe Tiara, both on loan from the Queen.

The Fringe Tiara has an interesting story that dates back to 1893. It started out as a diamond necklace/tiara designed by Collingwood & Co. and was a wedding gift to Princess Mary of Teck from Queen Victoria. In 1919 the tiara was then redesigned by Garrard in a fringe design which was popular at that time.

In 1936, Queen Mary gave the tiara to Queen Elizabeth the Queen Mother, who then loaned it to Princess Elizabeth on her wedding day to Prince Philip in 1947.  It was the “something borrowed”. Every bride hopes for a smooth wedding day, however, as Princess Elizabeth was getting ready to leave for Westminster Abbey, the tiara snapped!  Luckily the court jewellery was on standby.  He quickly took the tiara back to the workshop for repair and returned it in time for the nuptials.

In 1973, Queen Elizabeth loaned the tiara to her daughter Princess Anne on her wedding day to Captain Mark Philips.  Fast forward 47 years, the Fringe Tiara was Princess Beatrice’s crowning glory.

(Above) Princess Beatrice wearing the Fringe Tiara on her wedding day to  Edoardo Mapelli Mozzi,  2020. 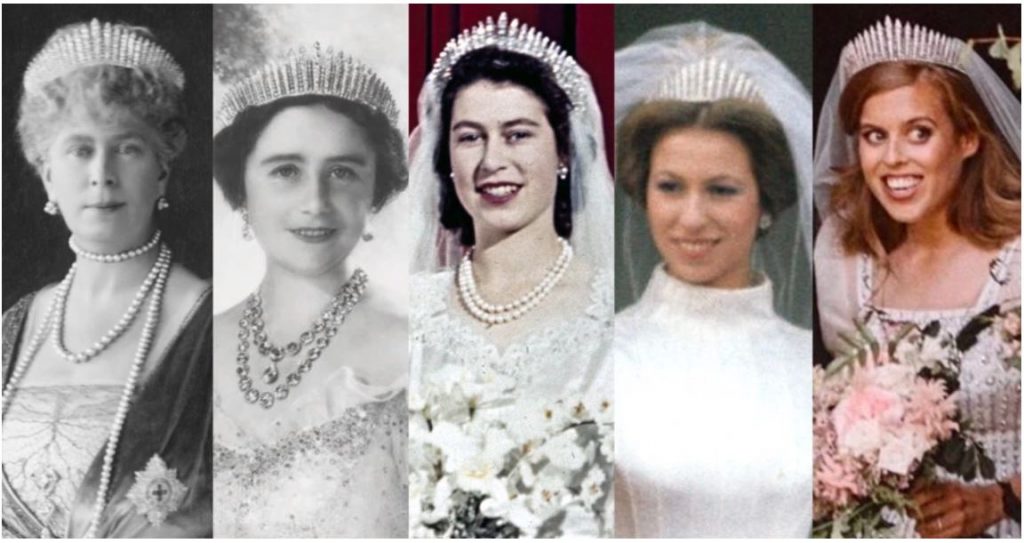 (Above) Queen Mary, The Queen Mother, Princess Elizabeth, Princess Anne and Princess Beatrice wearing the Fringe Tiara. It is a cherished royal heirloom that remains classic and timeless.