Posted at 09:00h in Birthday Gemstones, News by mara_hotung

January can be ever so gloomy.  The highs of Christmas are a distant memory.

For many of us, including me, grey skies and the permanent mist that clings to my hair and clothes that hangs over me like a dark cloud typifies mid-winter. It doesn’t seem to matter how many layers of clothes I put on, I still have that wet chilly feeling that somehow seeps into my bones.   January can be drab – unless of course, you happen to be born this month. As a January baby, you have much to cheer about as the colourful, lively garnet is your birthstone.

A bleak month needs a vibrant and bright gemstone to lift it and the garnet does just that.

It’s bright red hues of pyrope and almandine are exciting.  Rhodolite is a nod to the winter’s pomegranate.  The word garnet derives from the Latin word garnatum which means seed because it resembles that of the sweet pomegranate seed. 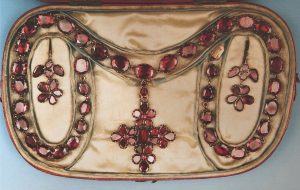 During the Georgian period, garnets were considered a very desirable gem as they were not only attractive but also affordable. They displayed high lustre and dispersion which is very similar to diamonds.  This added it their allure. During this period, they were usually cut flat and set in floral and naturalistic designs. These designs and the red colour were flattering to most skin colours which also added to their popularity. 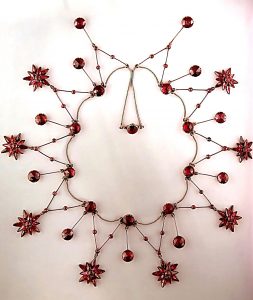 Rose-cut garnets were also popular towards the end of the late eighteenth century. The beautiful necklace to the left shows rose cut garnets mixed with smaller marquise-cut garnets on knife-edge swags. 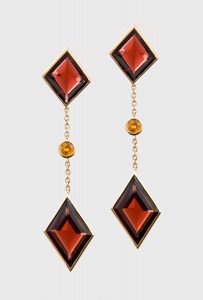 Today garnets remain a highly sought after gem. These rhodolite garnets are cut in a modern trapezoid-shape and are set with orange sapphires. Completely relevant to changing fashions but remaining timeless.

One of my favourite garnet colours is the vibrant orangey glow of Spessartite, also known as Mandarin garnet. The intense colour reminds me of a roaring fire or a red-streaked sky as dusk settles into night. Spessartite was first discovered in 1830 in Bavaria. Today it can be found in several localities: Africa, Madagascar and Sri Lanka. 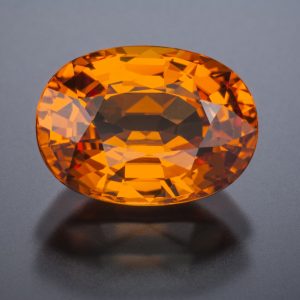 Laurie Donovan of Laurie Donovan Designs has a fantastic array of garnets. As well as being a designer and a goldsmith, Laurie also sources her own gemstones. She has a fantastic eye for colour as seen in her garnet collection.  Her passion for beautifully handcrafted jewellery is evident in the pieces she creates. When not at the bench, Laurie oversees a team of experienced jewellers who also create timeless pieces that are original and unique. 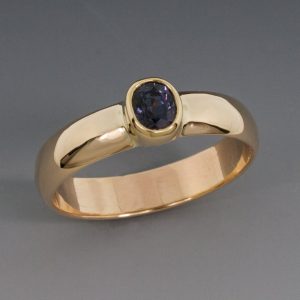 On all my gem travels, I’ve yet to see this rarity.  It’s a hybrid of pyrope-spessartine and displays blue-green to purple colour depending on the light it is viewed in, similar to an Alexandrite. If and when I come across one, I will certainly be talking about it!  Actually, I think a trip to Lennox, Massachusetts may be on the cards!

Intense green garnets like tsavorite and demantoid have always attracted collectors. Tsavorite garnets are a fairly new discovery. They were first spotted in Tanzania in 1967 and soon after in Kenya in the Tsavo National Park-hence its eponym. Its colour can rival that of an emerald. However, unlike emerald, tsavorites are fairly clean and exhibit fewer inclusions. 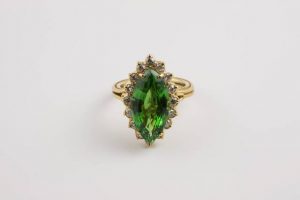 The demantoid is referred to as the ‘little green diamond‘ because of its high lustre. These alluring gemstones were first discovered in the early nineteenth century in the Ural Mountains and soon became a favourite of the Czar’s court. 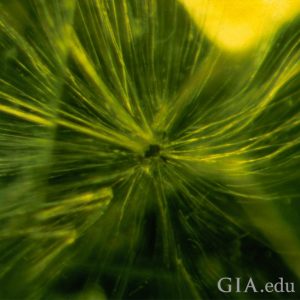 After the Bolshevik revolution, jewels and gems decreased in importance in Russia and were deemed vulgar. Mining activity virtually ground to a halt and other industries took precedent. This is another reason for its high value as there is not much new material on the market. It is only recently that mining for demantoids in Russia has slowly resumed, and new discoveries have been made.  If you happen to come across an old demantoid with a horsetail, buy it if you can and hold on to it.

There are, of course, garnets in several other varieties and colours. The ones I have noted here are the most popular. Notable others are malay, melanite and uvarovite. With their high lustre, strong dispersion and colours ranging characteristics, garnets vary from crimson red to purple-pink, fiery orange to verdant green and deep olive tones. I would say garnets certainly brighten up the cold, dark winter days of January.